The first Goryokaku Tower (60 meters in height) was built in December 1964 to commemorate the 100th anniversary of Goryokaku. Although the former tower was a popular attraction among the citizens and tourists for 41 years, it was demolished in June 2006 after entrusting its mission to the new tower.

The new tower (second generation) opened on April 1, 2006, stands 107 meters tall (including the height of lightning rod). From the observation deck, you can see Mount Hakodate, the Tsugaru Straits, and the Yokotsu Mountain Range, as well as a superb view of the star-shaped moat shining on the grounds of the national historic site Goryokaku. The observation deck has the Goryokaku Historic Corridor with exhibitions for learning about the history of Goryokaku, the See-Through Floor, which is made of clear hardened glass to look down through the glass floor, gift shop, cafe stand, and more.

The new tower itself is designed to express the special features of Goryokaku. The observation deck has a pentagon shape, and even the tower body is star-shaped in section to thoroughly feature the shape of the star fort.

Watch inside the building with Google Street View.

Key data of the Goryokaku Tower 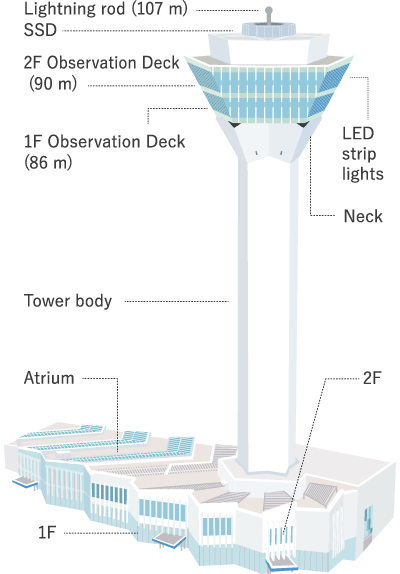 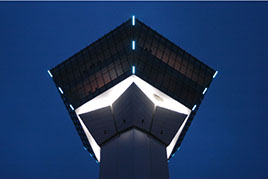 The LED lights around the exterior portion of the observation deck are lit at sunset every day. Normally, light blue lights come on at sunset. The color changes from light blue to dark blue for three minutes every hour to inform people of the time. During seasonal events, the LED strip lights change to various shades. You might see a different color than usual when you look up by chance. 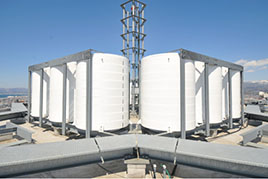 Goryokaku Tower is equipped with a vibration control device called the Super Sloshing Damper (SSD) to reduce vibrations to the tower from earthquakes and strong winds at the top of the tower. This SSD is an excellent vibration control system consisting of several containers containing water. It reduces building vibrations caused by earthquakes and strong winds by dampening the vibrations of the building with the movement of water. With this device, Goryokaku Tower is designed to ensure safety even during a 7.0-magnitude earthquake. In addition, the structure of the tower will not be affected by strong winds up to 50 meters per second as verified by a wind tunnel experiment. 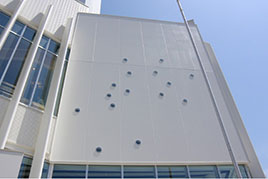 There is a total of 52 glass blocks placed on the surface of the five exterior walls of the lower tower.

These five exterior walls were set up to look like the night sky in the east, west, south, and north and at the zenith to show the representative constellations visible from Hakodate.
It is because the designer of Goryokaku, Ayasaburo Takeda, who was also a scholar of Dutch studies, wrote a book about constellations titled Senzo-Shinzu, which shows the stellar positions using latitude and longitude to teach students about navigation at the Hakodate School of Western Studies and Military Science. In addition, forty-two glass blocks of them glow at night to symbolize the tower’s 42 years of history.

Below is a list of constellations from the left side viewed from the front of the tower:
Northern sky: Cepheus
Eastern sky: Leo
Southern sky: Orion and Lepus
Western sky: Andromeda, Pegasus, Cassiopeia
Zenith: Ursa Major 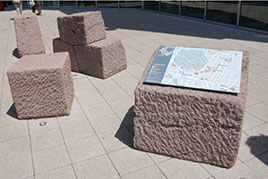 The vicinity map located next to the south entrance introduces cultural centers and public facilities around the Goryokaku Tower. The stone blocks use the same stone materials as the stone walls of Goryokaku, which are andesite rocks collected from Mount Hakodate.

You can now watch inside the Goryokaku Tower using Google Maps’ Street View. Street View is one of the features of Google Maps that let you watch 360-degree panoramic images as if you were right there.

Click here for how to use Google Maps’ Street View.